THIS IS HOW YOUR METABOLISM CHANGES THROUGHOUT YOUR LIFE

Your metabolism, the rate at which you burn calories, peaks much earlier in life, and starts its inevitable decline later than you might guess, a new study shows.

“There are lots of physiological changes that come with growing up and getting older,” says study coauthor Herman Pontzer, associate professor of evolutionary anthropology at Duke University. “Think puberty, menopause, other phases of life. What’s weird is that the timing of our ‘metabolic life stages’ doesn’t seem to match those typical milestones.”

For the study in the journal Science, Pontzer and colleagues analyzed the average calories burned by more than 6,600 people ranging from one week old to age 95 as they went about their daily lives in 29 countries worldwide. 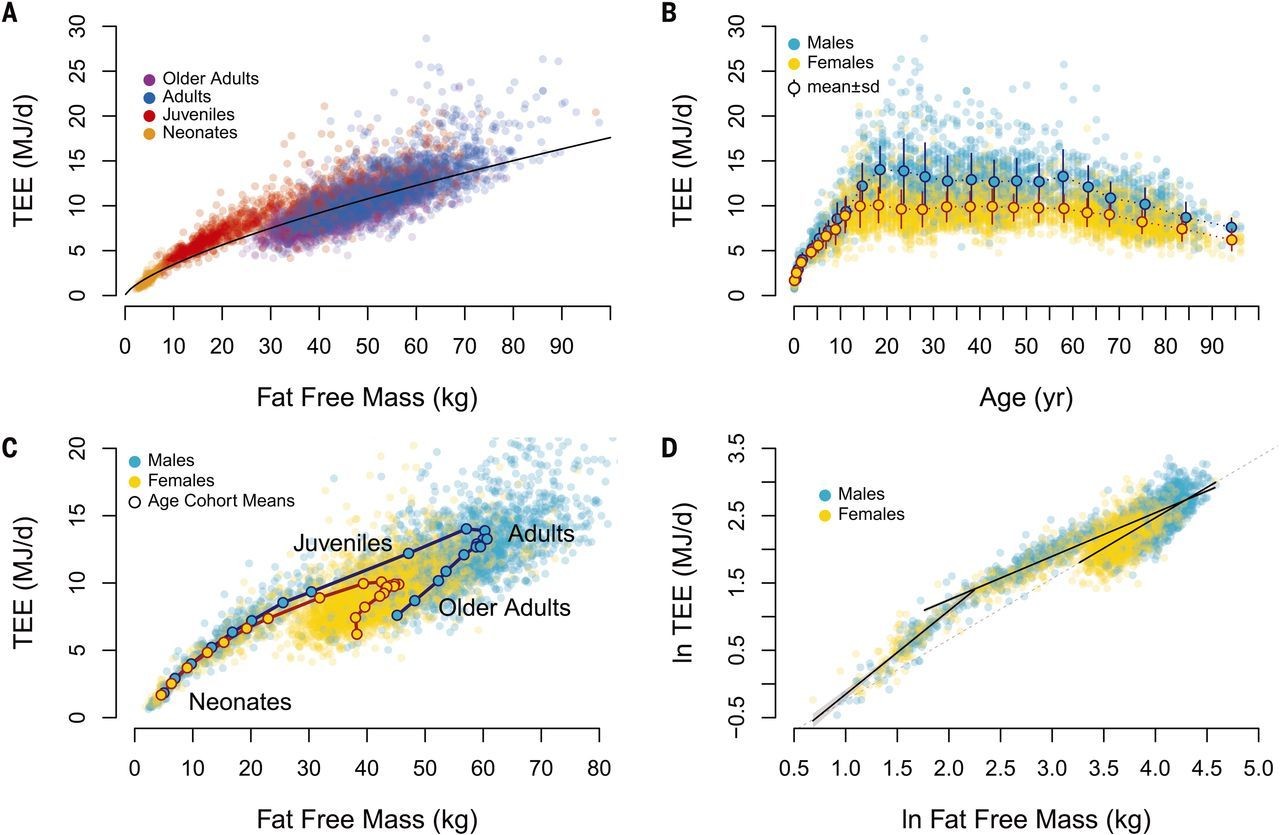 Previously, most large-scale studies measured how much energy the body uses to perform basic vital functions such as breathing, digesting, pumping blood—in other words, the calories you need just to stay alive.

But that amounts to only 50% to 70% of the calories we burn each day. It doesn’t take into account the energy we spend doing everything else: washing the dishes, walking the dog, breaking a sweat at the gym, even just thinking or fidgeting.

To come up with a number for total daily energy expenditure, the researchers relied on the “doubly labeled water” method. It’s a urine test that involves having a person drink water in which the hydrogen and oxygen in the water molecules have been replaced with naturally occurring “heavy” forms, and then measuring how quickly they’re flushed out.

BY THEIR FIRST BIRTHDAY, A ONE-YEAR-OLD BURNS CALORIES 50% FASTER FOR THEIR BODY SIZE THAN AN ADULT.

Scientists have used the technique—considered the gold standard for measuring daily energy expenditure during normal daily life, outside of the lab—to measure energy expenditure in humans since the 1980s, but studies have been limited in size and scope due to cost. So multiple labs decided to share their data and gather their measurements in a single database, to see if they could tease out truths that weren’t revealed or were only hinted at in previous work.

Pooling and analyzing energy expenditures across the entire lifespan revealed some surprises. Some people think of their teens and 20s as the age when their calorie-burning potential hits its peak. But the researchers found that, pound for pound, infants had the highest metabolic rates of all.

Energy needs shoot up during the first 12 months of life, such that by their first birthday, a one-year-old burns calories 50% faster for their body size than an adult. And that’s not just because, in their first year, infants are busy tripling their birth weight.

“Of course they’re growing, but even once you control for that, their energy expenditures are rocketing up higher than you’d expect for their body size and composition,” says Pontzer, author of the book, Burn (Avery, 2021), on the science of metabolism.

An infant’s gas-guzzling metabolism may partly explain why children who don’t get enough to eat during this developmental window are less likely to survive and grow up to be healthy adults.

“Something is happening inside a baby’s cells to make them more active, and we don’t know what those processes are yet,” Pontzer says.

After this initial surge in infancy, the data show that metabolism slows by about 3% each year until we reach our 20s, when it levels off into a new normal.

Despite the teen years being a time of growth spurts, the researchers didn’t see any uptick in daily calorie needs in adolescence after they took body size into account. “We really thought puberty would be different and it’s not,” Pontzer says.

Midlife was another surprise. Perhaps you’ve been told that it’s all downhill after 30 when it comes to your weight. But while several factors could explain the thickening waistlines that often emerge during our prime working years, the findings suggest that a changing metabolism isn’t one of them.

In fact, the researchers discovered that energy expenditures during these middle decades—our 20s, 30s, 40s, and 50s—were the most stable. Even during pregnancy, a woman’s calorie needs were no more or less than expected given her added bulk as the baby grows.

The data suggest that our metabolisms don’t really start to decline again until after age 60. The slowdown is gradual, only 0.7% a year. But a person in their 90s needs 26% fewer calories each day than someone in midlife.

Lost muscle mass as we get older may be partly to blame, the researchers say, since muscle burns more calories than fat. But it’s not the whole picture. “We controlled for muscle mass,” Pontzer says. “It’s because their cells are slowing down.”

The patterns held even when the researchers took into account differing activity levels.

For a long time, what drives shifts in energy expenditure has been difficult to parse because aging goes hand in hand with so many other changes, Pontzer says. But the research lends support to the idea that it’s more than age-related changes in lifestyle or body composition.

“All of this points to the conclusion that tissue metabolism, the work that the cells are doing, is changing over the course of the lifespan in ways we haven’t fully appreciated before,” Pontzer says. “You really need a big data set like this to get at those questions.”