Microsoft co-founder Bill Gates has been working to improve the state of global health through his nonprofit foundation for 20 years, and today he told the nation’s premier scientific gathering that advances in artificial intelligence and gene editing could accelerate those improvements exponentially in the years ahead.

“We have an opportunity with the advance of tools like artificial intelligence and gene-based editing technologies to build this new generation of health solutions so that they are available to everyone on the planet. And I’m very excited about this,” Gates said in Seattle during a keynote address at the annual meeting of the American Association for the Advancement of Science.

Such tools promise to have a dramatic impact on several of the biggest challenges on the agenda for the Bill & Melinda Gates Foundation, created by the tech guru and his wife in 2000.

When it comes to fighting malaria and other mosquito-borne diseases, for example, CRISPR-Cas9 and other gene-editing tools are being used to change the insects’ genome to ensure that they can’t pass along the parasites that cause those diseases. The Gates Foundation is investing tens of millions of dollars in technologies to spread those genomic changes rapidly through mosquito populations.

Millions more are being spent to find new ways fighting sickle-cell disease and HIV in humans. Gates said techniques now in development could leapfrog beyond the current state of the art for immunological treatments, which require the costly extraction of cells for genetic engineering, followed by the re-infusion of those modified cells in hopes that they’ll take hold.

For sickle-cell disease, “the vision is to have in-vivo gene editing techniques, that you just do a single injection using vectors that target and edit these blood-forming cells which are down in the bone marrow, with very high efficiency and very few off-target edits,” Gates said. A similar in-vivo therapy could provide a “functional cure” for HIV patients, he said.. 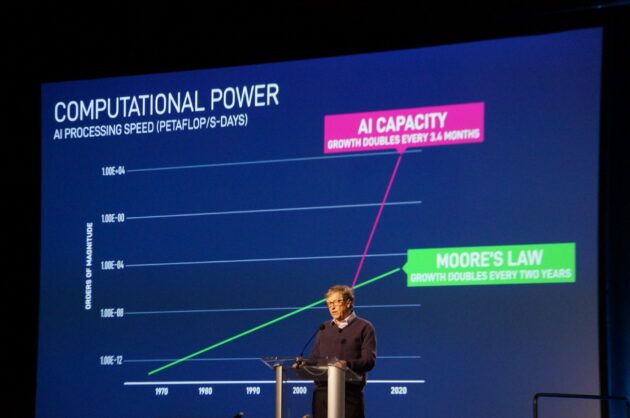 The rapid rise of artificial intelligence gives Gates further cause for hope. He noted that that the computational power available for AI applications has been doubling every three and a half months on average, dramatically improving on the two-year doubling rate for chip density that’s described by Moore’s Law.

One project is using AI to look for links between maternal nutrition and infant birth weight. Other projects focus on measuring the balance of different types of microbes in the human gut, using high-throughput gene sequencing. The gut microbiome is thought to play a role in health issues ranging from digestive problems to autoimmune diseases to neurological conditions.

“This is an area that needed these sequencing tools and the high-scale data processing, including AI, to be able to find the patterns,” Gates said. “There’s just too much going on there if you had to do it, say, with paper and pencil to understand the 100 trillion organisms and the large amount of genetic material there. This is a fantastic application for the latest AI technology.”

Similarly, “organs on a chip” could accelerate the pace of biomedical research without putting human experimental subjects at risk.

“In simple terms, the technology allows in-vitro modeling of human organs in a way that mimics how they work in the human body,” Gates said. “There’s some degree of simplification. Most of these systems are single-organ systems. They don’t reproduce everything, but some of the key elements we do see there, including some of the disease states - for example, with the intestine, the liver, the kidney. It lets us understand drug kinetics and drug activity.” 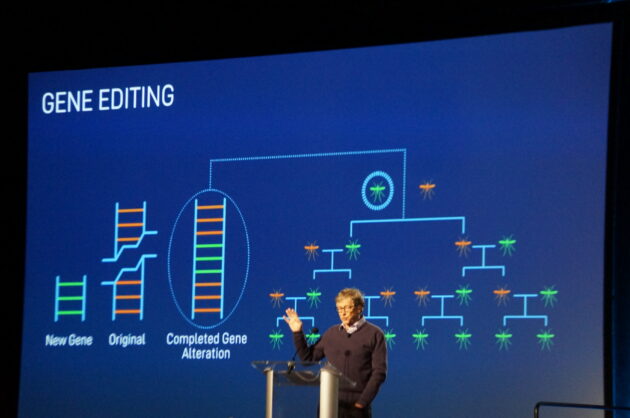 The Gates Foundation has backed a number of organ-on-a-chip projects over the years, including one experiment that’s using lymph-node organoids to evaluate the safety and efficacy of vaccines. At least one organ-on-a-chip venture based in the Seattle area, Nortis, has gone commercial thanks in part to Gates’ support.

High-tech health research tends to come at a high cost, but Gates argues that these technologies will eventually drive down the cost of biomedical innovation.

He also argues that funding from governments and nonprofits will have to play a role in the world’s poorer countries, where those who need advanced medical technologies “essentially have no voice in the marketplace.”

“If the solution of the rich country doesn’t scale down … then there’s this awful thing where it might never happen,” Gates said during a Q&A with Margaret Hamburg, who chairs the AAAS board of directors.

But if the acceleration of medical technologies does manage to happen around the world, Gates insists that could have repercussions on the world’s other great challenges, including the growing inequality between rich and poor.

“Disease is not only a symptom of inequality,” he said, “but it’s a huge cause.”

Other tidbits from Gates’ talk: