Longevity and Vitality - Why We Age

Healthcare today is reactive, retrospective, bureaucratic and expensive. It's sick care, not healthcare.

But that is radically changing at an exponential rate.

Through this multi-part blog series on Longevity, I’ll take a deep dive into aging, longevity, and healthcare technologies that are working together to dramatically extend the human lifespan, disrupting the $3 trillion healthcare system in the process.

I’ll begin the series by explaining the nine hallmarks of aging, as explained in this journal article.

Next, I’ll break down the emerging technologies and initiatives working to combat these nine hallmarks.

In this blog I’ll cover:

The System is Broken - Here’s the Data:

And Yet, We Live in the Healthiest Time in Human History:

Consider these insights, which I adapted from Max Roser’s excellent database Our World in Data: 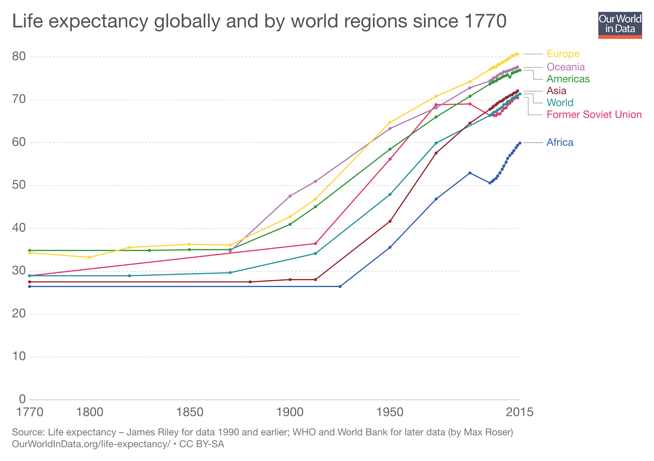 Figure: Around the globe, life expectancy has doubled since the 1800s.

The 9 Mechanisms of Aging:

*This section was adapted from CB INSIGHTS: The Future Of Aging.

With better healthcare, we can better treat some of the leading causes of death, impacting how long we live.

By investigating how to treat diseases, we’ll inevitably better understand what causes these diseases in the first place, which directly correlates to why we age.

Following are the nine hallmarks of aging. I’ll share examples of health-tech and longevity technologies addressing each of these later in this blog series.

Over the past 200 years, we have seen an abundance of healthcare technologies enable a massive lifespan boom.

Now, exponential technologies like artificial intelligence, 3D printing and sensors, as well as tremendous advancements in genomics, stem cell research, chemistry and many other fields, are beginning to tackle the fundamental issues of why we age.

In the next blog in this series, we will dive into how genome sequencing and editing, along with new classes of drugs, are augmenting our biology to further extend our healthy lives.

Each year at Abundance 360, I host a panel of world-class longevity researchers and CEOs to update our members on the current state and near future of these technologies. In just two weeks, I’ll be joined by Dr. Robert Hariri, Founder and CEO of Celularity, and legendary investor Jim Mellon of Juvenescence for a conversation on Longevity and Vitality. To apply for A360 and share your story, visit a360.com.

What will you be able to achieve with an extra 30 to 50 healthy years (or longer) in your lifespan? Personally, I’m excited for a near-infinite lifespan to take on Moonshots.