A movie just recently released called “Rampage” features an evil corporation using a genetic engineering technology called CRISPR, to transform a gorilla, among other animals, into a flying dragon-monster with gigantic teeth. Naturally, Dwayne “The Rock” Johnson exposes their villainy and strives to administer an antidote. Though this is science fiction, not to mention impossible, the movie captures the imagination of the public and their recent interest and fascination with CRISPR.

CRISPR, which stands for Clustered Regularly Interspaced Short Palindromic Repeats, was originally part of bacterial defense system that evolved to destroy foreign DNA that entered a bacterium. But this system was also capable of editing DNA – and now geneticists have honed the technology to alter the DNA sequences that we specify. This has generated enormous excitement and great expectations about the possibility of using CRISPR to alter genetic sequences to improve our health, to treat diseases, improve the quality and quantity of our food supplies, and tackle environmental pollution.

But a few recent scientific papers suggest that CRISPR is not without its problems. The research reveals that CRISPR can damage DNA that is far from the target DNA we are trying to correct. As a cancer biologist at the University of Pittsburgh School of Medicine, I use CRISPR in my lab to study human cancers and develop ways to kill cancer cells. Although the new finding appears significant, I don’t think that these revelations rule out using the technology in a clinical setting, but rather, they suggest we take additional cautionary measures as we implement these strategies.

CRISPR/Cas9 is being used to edit DNA in plants, animals, and in humans. But new studies are casting doubts about whether the technology is safe to use for human therapies.

Using genome editing to treat human diseases is very tantalizing. Correcting inherited genetic defects that cause human disease – just as one edits a sentence – is the obvious application. This strategy has been successful in tests on animals.

In the U.S. and Europe, clinical trials have been planned for several human diseases. Most notably, a gene-editing phase I/II trial is planned in Europe for human β-thalassemia, a hereditary blood disorder that causes anemia that requires lifelong blood transfusions. In 2018, a CRISPR trial for sickle cell anemia, another inherited blood disorder caused by a mutation that deforms the red blood cells, is planned in the U.S.

For both of these trials the gene editing is done ex vivo – outside the patient’s body. Hematopoietic blood cells, the stem cells that generate red blood cells, are taken from the patient and edited in the lab. The cells are then re-introduced into the same patients after the mutations have been corrected. The expectation is that by correcting the stem cells, the cells they now produce will be normal, curing the disease.

In my lab we have recently been focusing on the chromosome rearrangement, a genetic defect where a segment of chromosome skips and joins distant parts of the same or different chromosome. A scrambled chromosome is a defining characteristic of most cancers. The most famous example of such an alteration is the “Philadelphia Chromosome” – in which chromosome 9 is connected to chromosome 22 – which causes acute myeloid leukemia.

My team has used CRISPR in animal models to insert a suicide gene to specifically target liver and prostate cancer cells that harbor such rearrangements. Since these chromosome rearrangements occur only in cancer cells but not normal cells, we can target the cancer without collateral damage to healthy cells. 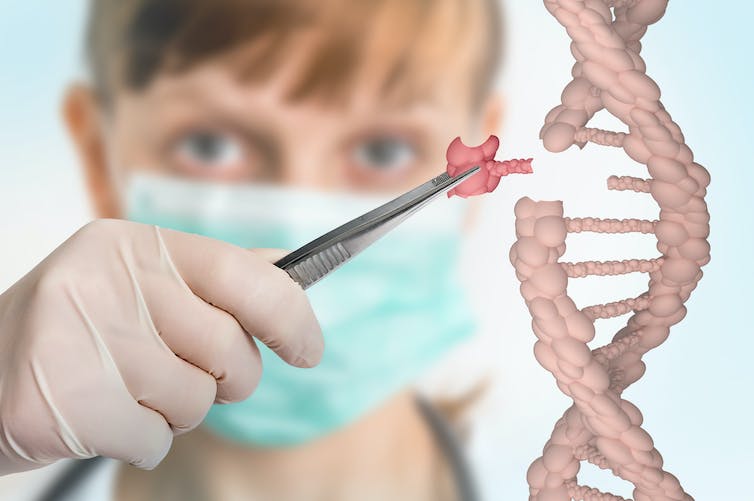 CRISPR is a tool for editing DNA that researchers claim is as precise as a surgeons’s scalpel. But new studies suggest it that CRISPR may cause off-target damage by slicing up the DNA far from the intended target, which could set the stage for cancer.

Despite all the excitement surrounding CRISPR editing, researchers have urged caution on moving too fast. Two recent studies have raise concerns that CRISPR may not be as effective as previously thought, and in some cases it may produce unwanted side effects.

The first study showed that when the Cas9 protein – part of the CRISPR system that snips the DNA before correcting the mutation – cuts the DNA of stem cells it causes them to become stressed and stops them from being edited. While some cells can recover after their DNA has been corrected, other cells could die.

The second study showed that a protein called p53, which is well known for guarding against tumors, is activated by cellular stress. The protein then inhibits CRISPR from editing. Since CRISPR activity causes stress, the editing process may be thwarted before it even accomplishes its task.

Another study over the past year has revealed an additional potential issue with using CRISPR in humans. Since CRISPR is a bacterial protein, a significant portion of human population may have been exposed to it during common bacterial infections. In these cases, the immune system of these people may have developed immune defense against the protein, which means a person’s body could attack the CRISPR machinery, just as it would attack an invading bacterium or virus, preventing the cell from the benefits of CRISPR-based therapy.

Additionally, like most technologies, not all editing is accurate. Occasionally CRISPR targets the wrong sites in the DNA and makes changes that researchers fear could cause disease. A recent study showed that CRISPR caused large chunks of the chromosome to rearrange near the site of genome editing in mouse embryonic stem cells – although this effect isn’t always observed in the other cell systems. Most published results indicate that off-target rates ranges 1-5 percent. Even if the off-target rate is relatively low, we don’t yet understand the long-term consequences.

CRISPR dangers have been hyped

The studies referenced above have led to a glut of media reports about the potential negative effect of CRISPR, many citing potential cancer risk. More often than not, these involve a far-fetched extrapolation of actual results. As far as I am aware, no animals treated with the CRISPR-Cas9 system have been shown to develop cancers.

Studies have shown CRISPR-based genome editing works more efficiently in cancer cells than normal cells. Indeed, the resistance of normal cells to CRISPR editing actually makes it more appealing for cancer treatment since there would be less potential collateral damage to normal tissues – a conclusion that is supported by research in our lab.

Looking forward, it is obvious that the technology has great potential to treat human diseases. The recent studies have revealed new aspects of how CRISPR works that may have implications for the ways in which these therapies are developed. However, the long-term effect of genome editing can only be assessed after CRISPR has been used widely to treat human diseases.